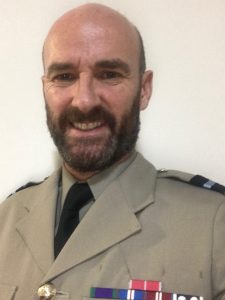 Mark Northover joined the RAF in 1987 after sponsorship through Sixth Form and University studies. He completed his first tour commanding an Aircraft Component Repair Flight at RAF St Athan, followed by a posting in 1991 to be Junior Engineering Officer on 3(F) Squadron, which operated the Harrier GR7 from RAF Gütersloh and RAF Laarbruch in Germany.

In 1993, Mark joined the Royal Air Force Aerobatic Team, the Red Arrows, as Officer Commanding 1st Line Engineering Flight. During this tour Mark deployed extensively to South Africa, the Far East and Australasia in support of UK export campaigns. He was awarded the MBE for his services to the Red Arrows in 1997.

After a short appointment in the Harrier Support Authority at RAF Wyton, Mark was selected for promotion to squadron leader in 1997 and became the Engineering Authority for RAF and Royal Navy Aircraft Assisted Escape Systems. Remaining at RAF Wyton, Mark served as the engineering specialist member of the VC10 Airworthiness Review Team in 1999, carrying out an independent review of the design, operation and support of the ageing VC10 fleet.

In 2000, Mark returned to the Red Arrows to become the first squadron leader Senior Engineering Officer.  He was also the Project Officer for the Team’s relocation from RAF Cranwell to RAF Scampton.

At the end of 2002, Mark deployed on operations to Prince Sultan Air Base, in the Kingdom of Saudi Arabia, as Officer Commanding Engineering Support Squadron. A return to RAF Wyton followed where, as the Harrier Fleet and Programmes Manager, he was responsible for the GR7A and GR9 upgrades.

Promotion to wing commander in 2004 saw Mark learning German ahead of Advanced Staff Training at the German Armed Forces Staff College in Hamburg. On completion of the course in 2007, he was posted to the Typhoon Project Team at DE&S Abbey Wood, responsible for developing the Typhoon Availability Service contract with industry. This was followed in late 2009 by command of Engineering and Logistics Wing at RAF Leuchars, during the drawdown of the Tornado F3 force and the station’s transition to becoming a Typhoon Main Operating Base.

Mark was selected for promotion to group captain in 2012 and posted to the MOD Saudi Armed Forces Project (MODSAP) where he was responsible for supporting the Typhoon aircraft operated by the Royal Saudi Air Force.

In April 2015 he became the No 1 Group Chief Air Engineer at HQ Air Command, RAF High Wycombe, where his responsibilities included the F-35 Lightning, Typhoon, Tornado, Hawk, the ISTAR /UAV fleets and the vintage aircraft of the Battle of Britain Memorial Flight. Mark became MOD Exports Typhoon Chief of Staff in December 2016, leading the UK’s campaigns to meet Belgian and Finnish future fighter requirements. In July 2020, Mark took up his current appointment as Head of Programmes, MODSAP, based in Riyadh, KSA.

Mark is married to Kathleen and their family home is in Edinburgh. Outside of work, he enjoys travelling and most sports, but particularly golf and skiing.

All photographs on this site are copyright - permission must be granted by the RAA to any individual prior to usage. comms@redarrowsassociation.co.uk